Chaos and Order in Software Development

The world (and software development) can be chaotic, so we have conventions and rules to bring about order. This enables progress, but we must also recognise the cost.

In a chaotic world, everything is unpredictable and nothing makes sense. The outcomes of your actions are random, which makes it impossible to move towards a goal. Individuals act in their own self interest without any cooperation or collective effort, further stifling progress.

So, since time immemorial, we’ve developed social norms and conventions to tame the chaos and bring a degree of order. If we have an idea of how others will interact with us, then we can make our way in the world, and we can make some progress. We also developed common values, enabling us to agree on important issues and collective goals, accelerating progress further.

For this reason, we’ve been able to organise in greater numbers than any other species, and impacted the world accordingly.

As societies continued to evolve, some of our norms became rules and laws, and some of our values became morals, further increasing orderliness. However, if left unchecked, this process can continue until the role of the collective overwhelms the individual. This can make for highly efficient organisations, but it’s disastrous for innovation and creativity.

On the spectrum from order to chaos, things can get pretty bleak at each end, but luckily the wisdom of the ages gives us ways to recognise and deal with the problem. 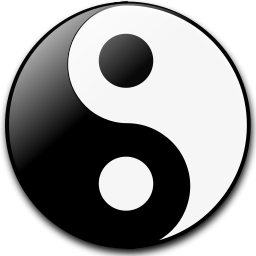 The Taijitu, used in Daoism and other philosophies, symbolises how seemingly contrary forces are often complementary and inter-dependent. Everything is said to have yin and yang, and the goal is to find the right balance between the two.

The particular duality of order and chaos manifests all around us, with interesting examples as diverse as: Sports, with enough rules to makes things comprehensible without stifling individual creativity and flair; Music, where composers blend regular scales, rhythms and harmonies with occasional dissonance, accidentals and free time; Randomized algorithms such as Monte Carlo, which benefit from random input; and modern democratic systems where the left (keen to embrace the unknown) are (in theory) kept in check by the right (emphasising the importance of tradition) and vice versa (in theory).

Finally, what’s interesting to note about the Taijitu is the black dot within the white and the white within the black. The former warns us that extreme orderliness can render a particular type of tyrannical chaos, where the individual’s actions become overwhelmed by the will of the group, and therefore meaningless. Conversely, the latter represents how order can, sometimes, emerge from a sustained period of chaos. This typically unpleasant process is familiar in its milder forms as benefiting from time spent outside your comfort zone, while in the more severe case, it’s captured by the adage from the hottest fire comes the strongest steel.

As interesting as this may be, it’s fair to question whether it’s applicable in the workplace or, more specifically, to software development teams. It turns out to be remarkably easy to find examples where the general ideas expressed above ring true in our everyday experience as software developers.

The list goes on, and it can even strike lower down Maslow’s Hierarchy of needs, e.g., you’re not sure if you’ll be in a stable, comfortable working environment from day to day, or simple HR issues aren’t treated consistently.

If you recognise any of the above, then you need to find a way to bring about some order. When the things on this list rear their head, they can wipe hours from your day, even days from your week, devastating productivity. However, they can all be addressed: some need time, some need money, some need communication, some need leadership, but all require attention. If you don’t? Well, it’s true that if you spend enough time in the wilderness you may just end up with JQuery, but I wouldn’t call that a good strategy.

But can you, as history teaches us, take it too far?

The good news is that the line between order and chaos isn’t a razor’s edge. You can walk it comfortably if you’re aware of the warning signs as one side grows too dominant and you take careful, remedial action when necessary.

Small companies that move quickly, adapt to change and allow individuals to flourish are more likely to allow chaos to get a foothold. They’re also more likely to draw order from chaos but beware of survivorship bias in any such anecdotes. If you’re in a small company, therefore, consider how some consistent processes and predictability might improve things.

Big companies with layers of bureaucracy and explicit, overt company values are more susceptible to overdo orderliness. In these companies, individual freedom is naturally limited so it can be difficult to change things. However, experimenting with technologies and blue sky days could pay dividends. You can develop piecemeal by changing one part of your stack, for example switch to TypeScript on the front end, while keeping the rest of the stack familiar.

The good news is that we’re naturally equipped to know on an emotional level when we’re on the right path. To quote Jordan Peterson of the University of Toronto, who speaks a lot on the ideas expressed here:

It’s here that individuals can flourish, groups can co-operate, and organisations can succeed. That’s what you should aim for.